Well the hunting season is starting with the opening of dove season and prairie and mountain grouse in some states. Is your pointing dog ready for the field?  This next lesson will get that young pup started or that older dog much improved. Remember. Your dog must be completely “WHOA broke” before moving onto this part of the training See previous “Tips” on proper WHOA breaking.

Staunchness and steadiness on point is crucial to having a good dog in the field. If your dog rushes in or even creeps in after establishing point, you have lost many an opportunity to harvest birds. The following drill, if followed religiously, will get your dog to hold point once established. Remember last month we worked on what I call the “Fly Away Drill”. You can go to last month’s tip to review. The next step is teaching “Staunchness on Point”. I like to begin by placing a pigeon (homer or feral) in a mechanical launcher. The launcher can be electronic or manual with a pull cord on the release lever. Both work nicely for this exercise.

Have the dog on a check cord cinched at the flank. (See photo). 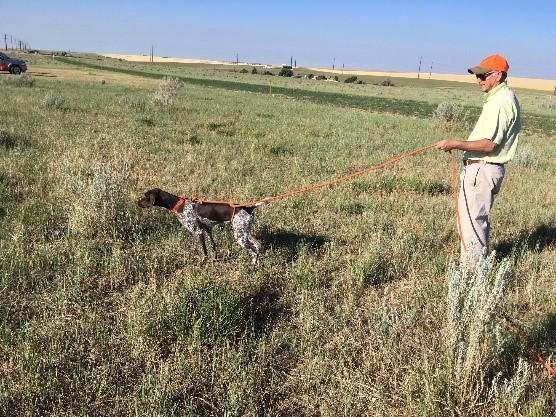 The reason we have check cord on the flank in the beginning of this exercise is to prevent the dog from “blinking” the bird. Blinking is when the dog scents the bird and moves away rather than establishing point. It is caused by applying too much pressure when correcting the dog. Any correction will occur at the flank vs the neck which helps prevent the dog from thinking the bird caused the correction.

Quarter with a crosswind. This way he/she will enter the scent cone and receive a sudden blast of scent. The sudden blast of scent will cause the dog to stop (point) suddenly rather than “road” or creep up to the bird if run directly into the wind. Once your dog establishes point, place tension on the cord to encourage the dog not to move forward after establishing that point and command WHOA. Your dog knows the command “WHOA” from yard training, so say WHOA in a soft soothing tone. If your dog moves in after point, place him back in the original pointing position and command WHOA in a sharp tone. He/she will learn what’s right or wrong by the tone of your voice.

Have the dog hold point a few seconds, then release the bird (flush) and let him/her watch (mark) the bird. If they chase, they will not go far as learned from the fly away drill. Eventually, you will teach your dog to remain “steady to the wing (flush)” which we will cover later in our monthly tips.

Keep repeating this drill until you can trust the dog not to rush in or creep into the bird. Then you can move to a tip up type of device which keeps the bird in place until you “tip up” the device thus releasing the bird. These units can be purchased on-line from any bird dog supply house.

Keep repeating this drill until your dog will hold point for at least two minutes before you flush the bird. Also, give the dog some distractions like pretending to flush the bird by kicking around the bird before flushing. Remember to place your dog back to the original pointing position if he only takes one step forward. It is ok if the dog lifts a front leg on point and then places it back on the ground which is quite common. He/she has not moved forward.

Tune in again next month as we will move to working with game birds and introducing gun fire to this drill. See you then. 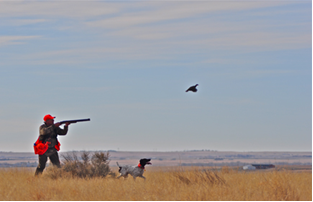