Click the image below to shop the retriever training products recommended by Lyle and Castile Creek Kennels. 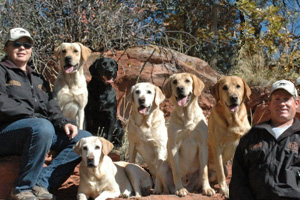 Dale has been working with animals as long as he can remember. He is known for breeding and training Pointing Labrador Retrievers for field trials and hunting. He has owned and trained more than 15 Grand Master Pointing Retrievers, GMPR. At least four of his dogs have been inducted into the American Pointing Labrador Association Hall of Fame. His dogs have APLA, AKC and UKC titles.

Dale is an avid hunter, travels to compete and conducts training seminars in the sporting dog area at the Sportsman’s Expo, held in January in Denver, demonstrating the breed’s versatility. 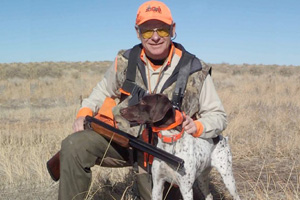 CJ Kausel of Hunt Smart Productions, LLC has trained and hunted with his own bird dogs for over 30 years. He is a member and President of the Rocky Mountain Sporting Dog Club. He also contributes to our Dog Training Tips.

CJ and his shorthairs give dog demonstrations and seminars at the local Sportsman’s Warehouse, Gander Mountain and Bass Pro Shops outlets. They have appeared in the in the sporting dog arena at the Sportsman’s Expo over the several years. It is held each January at the Denver Convention Center..

Lise & Scott train and own champions. Lise & Vhoebe du Loups du Soleil, Belgian Malinois, are one of the top ranked teams. Vhoebe breaks records and sets a high bar. Lise & Vhoebe are also part of Team 21, which raises awareness about Down syndrome & funds for organizations that provide services to help these individuals thrive. Vhoebe’s athletic ability has been covered by Sports Illustrated, Sports Center and other outlets.

Scott’s Dutch Shepherd, Battleridge Trebuchet, maybe new to the dock diving but he exhibits great athleticism. Great things are to be expected from him.

Working with dogs runs in Ashley’s family. Her mother was a dog trainer and breeder. Ashley trains and competes with dock diving dogs. She regularly competes with Pyro and J.A.T.O, a Belgian Malinois. Her Dutch Shepherd, Pyro, has competed Iron Dog, Super Retriever Series, Purina Incredible Dog Challenge and others. Pyro has also been featured in commercials and has film work under his collar.